Author Samuel Avery has signed a contract with Ruka Press to publish his fifth book, tentatively titled The Pipeline and the Paradigm: Keystone XL and the Rise of Global Consciousness. Bill McKibben, president and co-founder of 350.org and the author of The End of Nature, is slated to write a foreword. Publication is planned for spring 2013.

Over the past year, the proposed construction of the Keystone XL pipeline from Albertaâ€™s tar sands to the Gulf of Mexico has become a major rallying point for environmentalists and a point of contention between President Obama and Congress. NASAâ€™s top climate scientist James Hansen has said that burning the oil locked in Canadaâ€™s tar sands would mean â€œgame over for the climate.â€ The direct action protests led by McKibben in 2011 at the White House resulted in hundreds of arrests (of celebrities, like Darryl Hannah and Margot Kidder, and of ordinary people, like Avery) and caused the administration to change course on policy. When the president announced in January that the application by TransCanada to build the pipeline was being rejected, the environmental community rejoiced, but the victory is likely to be short-lived. 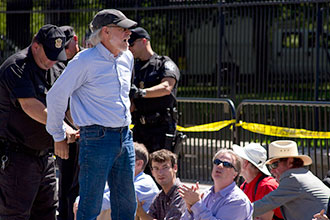 Avery under arrest during White House protest in 2011.

According to Avery, â€œObama has skillfully steered environmental questions toward the issue of the routeâ€”will it go through the Sand Hills of Nebraska, or will he do his part to save the environment by insisting on a safer route? The overall climate impact of the tar sands, though, has not yet reached the general public.â€

Avery is currently traveling the proposed route of the pipeline from Alberta through the Great Plains to Texas, interviewing people on both sides of the issue. â€œThis book will not be a polemic,â€ he said. â€œIt is not about opinions, but about worldviews. This is essential; my interest in writing this is in how people from widely different worldviews can see so much variety while looking at the same thing.â€

The book will move beyond the pipeline itself to include discussion of alternative energy, electric cars and solar power, and the need for a shift from an economic mindset that considers only the bottom line to one that values the environment. Avery is the author of four previous books, most recently Buddha and the Quantum, published by Sentient Publications in 2011.

In keeping with the bookâ€™s environmental focus and Ruka Pressâ€™ philosophy, The Pipeline and the Paradigm will be published on 100% recycled paper, as well as in appropriate e-book editions.

Weâ€™re very excited about adding Sam to our roster of authors. The Keystone XL pipeline is a major rallying point. But perhaps more importantly, his book contains brilliant insights into climate change and environmental consciousness in general.