The Pipeline and the Paradigm

Keystone XL, Tar Sands, and the Battle to Defuse the Carbon Bomb 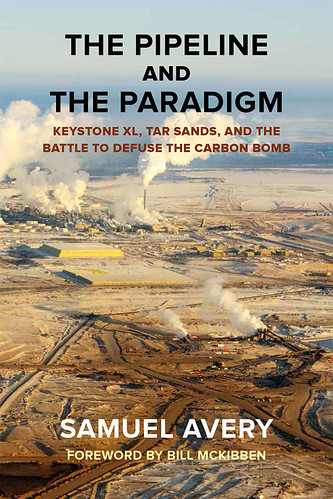 Distributed exclusively to the book trade by Small Press United. For bulk discounts or to request a review copy, contact sales@rukapress.com.

The Earth will never be the same.

There may be enough carbon trapped in the Canadian tar sands to plunge the Earth into irreversible climate change, and it is the Keystone XL pipeline that will set that carbon free. Is this 2,100-mile steel pipeline a vital piece of our nation’s energy future or the conduit for global climate disaster?

In The Pipeline and the Paradigm, Samuel Avery investigates the economic, ecological, political, and psychological issues behind the Keystone XL—a project so controversial it has inspired the largest expression of civil disobedience since the Civil Rights movement of the 1960s. In this thoroughly researched, wholly engaging book, Avery takes readers from enormous tar sands mines in Alberta to a tree-top blockade in Texas to meet the people and explore the competing interests that power the environmental issue of our time.

Bill McKibben, founder of 350.org and the leading force behind the growing movement to stop the pipeline, wrote the foreword. He says, “Sam Avery [has] gone deeper into the story of the pipeline than almost any other journalist. This volume tells a deep story about the resistance to the pipeline, one of the epic battles of recent environmental history.”

Avery illuminates various issues surrounding the pipeline, including the “carbon bomb” of global warming that is trapped in the tar sands, TransCanada’s heavy-handed use of eminent domain to seize property in America’s heartland, and the environmental damage being endured by indigenous communities in Alberta. Although he clearly presents both sides of the issues, Avery is not a disinterested observer; he has been, in fact, arrested twice at anti-Keystone actions in Washington, DC, and Texas (episodes that frame the book’s narrative).