Vote for a Cover

Thereâ€™s an election going on this week that will determine the future of our country. And, on the other hand, thereâ€™s this.

We’ve narrowed down the choices for the cover of our next book, The Pipeline and the Paradigm: Keystone XL, Tar Sands, and the Battle to Defuse the Carbon Bomb, to two, but we need your help choosing the final cover.

In The Pipeline and the Paradigm, Sam Avery investigates the economic, ecological, political, and psychological issues behind the Keystone XLâ€”a project so controversial it has inspired the largest expression of civil disobedience since the Civil Rights movement of the 1960s. In this thoroughly researched, wholly engaging book, Avery takes readers from enormous mines in Alberta to jury-rigged blockades in Texas to meet the people and explore the competing interests that power the environmental issue of our time.

The two covers are below. Please leave your vote and your thoughts in the comments. (Legal disclaimer: results of vote are nonbinding.) And to sweeten the deal, we’ll send a free book to a randomly selected commenter. We’ll let you know who won, and when the book is available, in a future edition of this newsletter (and on Twitter, Facebook…). Thanks! 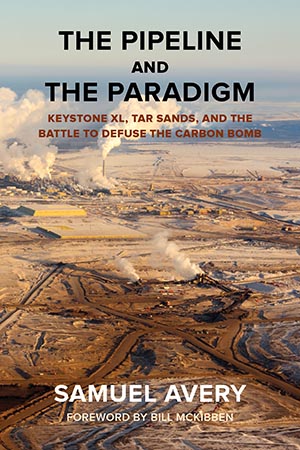 25 Responses to Vote for a Cover

I like both! I think Option 1 is more readable (and the photo is scary), but the one on the right is so minimal and high-impact. Is there a way to increase the angle of the pipeline or something to allow the words to stretch further (to be easier to read)?

The title in Option 1 is more readable, but the overall effect is more dated. Option 2 is more modern.

I agree with Heidi. Option 2 has more of an immediate impact, but there’s a bit of a legibility issue – as well as it taking a moment to figure out it’s a pipeline versus, say, a cigarette.
The meaning in Option 1 is more immediately clear and generates a much stronger emotional/visceral reaction because of the dramatically scarred landscape.

Option 1 is more threatening and more legible. I agree with another post that it is not immediately clear in Option 2 that the cylinder is a pipeline. I also think Option 1 is more attractive (but I am not a fan of the abstract).

Use option # 1 for the front cover (but make Bill McKibben’s name more readable) and use option # 2 (just the graphic) for the back cover.

I like #1 better because I think we really need to SEE what we are doing to the surface of this planet. I also agree with Wendy that Bill McKibben’s name should stand out more.

I ABSOLUTELY love #2, though Mike has a good point about the ambiguity of the cylinder. Maybe it would be easier to understand if the oil drop was larger?

I think the image in #1 is very impactful but I’d consider moving it down some so that the title/subtitle is entirely in the sky. That might also help fix the readability issue at the bottom.

I find option 2 hard to read. Plus an image is worth a thousand words, right? I vote option 1

Definitely number 1, because I Instantly know what book is about. Option 2 takes more work to figure out what the book is about, and it is hard to read the lettering.

I prefer #1 because the visual tells the story. #2 is somewhat captivating because it’s different. How about the shape of the pipeline/words on #2 laid over the image of #1?

#2 is the clear winner. It’s different, distinctive and eye-catching.

The second one is so eye-catching. However the words are difficult to read, especially the beginning of the graphical pun, “The Pipeline.” Possibly use “&” rather than “and” to allow Pipeline to be larger.
The first one is nice, but ordinary. Nothing stricking about the photo or its text treatment, even though it’s a very good photo. Takes too long to figure out what the photo is about, decipher it, comprehend it.
Might be better if the photo were cropped more tightly, bringing the drilling rigs closer to the audience’s eye. A tad of smoke in front of the text, partially obscuring it, would bring some visual tension to the design. And the text treatment overall is bland.

IDEA: Keep the pipe graphic, but limit the text to “KEYSTONE XL” and use it as sort of a branding logo for the book and related material.
Use the new pipe graphic on cover 1 with pipe’s drop of oil can dripping onto the title just a tad. Give a tighter crop of the photo, better type treatment, and some of the smoke slightly overlapping the title text to take cover 1 from ho-hum-nice to dynamic.

I have a strong preference for the one on the left, the realistic one. It looks serious and this is a serious topic. You might do something to modernize the look of it, though. It has the feeling of an old west photo, not a current issue. The one on the right does not convey the issue, though I understand it is a pipeline. No urgency to it. Great work on both!

I agree with the other comments about the legibility of #2. Perhaps put the title above the pipeline graphic and put the subtitle alone on the pipeline? Otherwise it seemed like there was too much unused cover space and all the words were jammed into one area.

#1 is good in terms of impact and I was going to vote for it, but I also agree with the other comments about it seeming a tad dated. But I do like the photo giving me a direct hit of the decimation of the issue at hand.

Once again, Ruka Press has some great graphics! I lean towards Option #1 (A picture is worth a thousand words.), however the photo should be more focused and tighter (a single pipeline, a single factory, a single smokestack). As others have suggested – a restructuring of Option #2 (to make it more readable) should also be considered.

Option 1 immediately evokes an understanding and gut reaction, as you read the title, to what is happening with the topic. I like the idea of option 2 as well, but don’t feel that it is easy to read, or as gripping as option 1. Some folks may see the cover of this book, in a bookstore or library, but not read it. The cover will give them a lasting impression of the book’s message.(I assume option 1 represents the author’s intent).

Option 2, without a doubt! Love it.

I agree with most of the comments. I like the idea of cover 2 but it is much much harder to read. I like the simple design of it and think it has a lot of potential if there is some room for a re-design. cover 1 packs a powerful punch in some ways because the image is striking but seems very Text Book like.

Pingback: We Have a Winner | Ruka Press